Chinatown is one of the best places you can visit on your trip to NYC.

It is drastically different from all the other neighborhoods and offers sights and experiences you won’t find anywhere else. The food in Chinatown cannot be beat in terms of variety and price and there is one item sure to be on the menu at nearly any eatery you choose: the dumpling! In case you have not had the pleasure, a dumpling is dough wrapped around a filling of some kind. The varieties are endless and many cultures have their own version; whether it be the Italian ravioli or the Polish pierogi, or even Nepalese momos! In Chinatown they are usually called “dumplings” and even if they are listed under another name on the menu, the staff is sure to know what you are asking for. Planning a trip to Chinatown and don’t know where to start? Here are five of the top rated dumpling houses in the city! 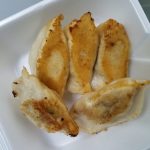 Joe’s Shanghai is a legend in Chinatown for my favorite kind of dumplings: SOUP DUMPLINGS! If you have never had them before, you have to give them a try. Also known as xiao lao bao, they are a little messy, but seriously delicious! They offer two kinds of soup dumplings; crab and pork or just pork. I really love the crab and pork. Joe’s Shanghai and it’s sibling Joe’s Ginger are run a little differently than your average restaurant. You will most likely be sharing a table with other diners and they will probably assume you are their for the soup dumplings, you may even have to ask for a menu! But trust me, this is the perfect place to start off your night of dumpling hopping!

If you want to try something a little different, but very authentic, try one of their whole fish steamed, braised, or spicy! 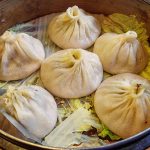 Another great spot known particularly for their dumplings is, of course, Tasty Dumpling. These guys offer a wide variety of dumplings, hence the name. You may want to try their classic chive and pork or one of their rotating specials. I opted for the chicken and mushroom this time, which I really enjoyed. The dough is on the thicker side and the filling was savory and surprisingly flavorful. This is definitely the place to go to please a lot of people since the also offer nearly every variety in both fried and steamed. They even have frozen dumplings you can take home and make yourself!

They also have great soups, try their chicken and corn or hot and sour soup! 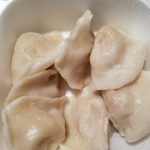 Wo Hop is one of the most famous Chinese restaurants in NYC. They even sell their own T-shirts! They are classic; to get inside you have to go down some stairs and all the waiters wear old fashioned jackets. Apparently not much has changed about the space since 1938, although they rotate their pictures of patrons and visiting celebrities often. Sharpie-signed dollar bills line the walls as well as graffiti! Wo Hop offers several styles of dumpling and is most famous for its wonton (aka dumpling) soup, but this time I wanted to try their pan fried pork dumplings. They were large, moon-shaped and were delicious with their sauce. Wo Hop is a legendary late night spot they are open till 7 am! These dumplings are sure to hit to spot after bar hopping in the Lower East Side!

Still hungry? Try their famous wonton crisps, they’ll give you a huge bowl for 50 cents! 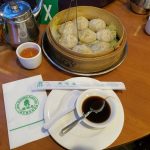 If you or someone in your group is vegetarian, Chinese cuisine can sometimes be challenging depending on which restaurant you choose. But Vegetarian Dim Sum House lives up to its name. They offer a few different kinds of veggie dumplings, some fried and some steamed. I heard the steamed spinach dumplings were particularly good. They were huge! They come three to an order, but that’s all you need. You also can’t find a green dumpling a lot of places, even in Chinatown. If you are looking for one of the healthiest Chinese restaurants in they city, you cannot go wrong with Vegetarian Dim Sum House!

They also have awesome veggie spring rolls and a wide variety of healthy (and not so healthy) vegetable dishes.

It’s all in the name. This truly is a hole-in-the-wall place that serves locals, tourists, and nearly everyone who stumbles upon it for the simple reason that they are the cheapest! You can get five dumplings for $1.50, which has all of our other places beat. They are fried pork pot-sticker type dumplings but they are really tasty (actually worth much more than they sell them for) and they have been a Chinatown favorite for years. They are able to keep their prices so low because they are small and no-frills. They offer a few other things, but they continuously sell these fried dumplings all day so they are sure to be fresh.

People really just come here for the dumplings but they also offer steamed buns that tend to sell out if you want to try more! 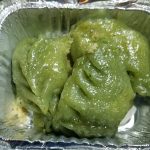 Every New Yorker has a favorite Chinese restaurant and this one is mine. There are a lot of great things to pick from on the menu. The thick udon noodle dishes are very popular, as well as their chicken dishes. But they also have amazing soup dumplings and I couldn’t help but include one more spot.These soup dumplings are a little smaller and thinner than Joe’s Shanghai, but I like these a little more. They have two kinds: pork and truffle. Truffle soup dumplings are hard to come by and if you are a fan, you should give them a try!

Give anything else here a try and I’m sure you will see why I like it so much!

Now that you have some ideas, you can think about what kind of dumplings you want to try. All of these places are within a few blocks of one another so you really can try them all! There are also many other places along the way you should try out, sometimes wandering around until you stumble upon a place you like is the best way to find your new favorite restaurant. One more piece of advice, many of these establishments are cash only, so stop by an ATM along the way. Happy Dumpling Hopping!