New York City is fabulous but can be claustrophobic at times, too. All those buildings blotting out  the sky and humans jostling for space can leave you craving the countryside. When you start to dream of cool breezes and wildlife other than pigeons doing fly-bys into your personal space, it’s time to get out of the city.

Luckily there are plenty of ways to escape, all of them accessible via New York’s commuter rails. So hop on a train where you’ll snake along the Hudson River, barrel toward the beaches of
Long Island, or journey to the Garden State. The question is: where should you get off? 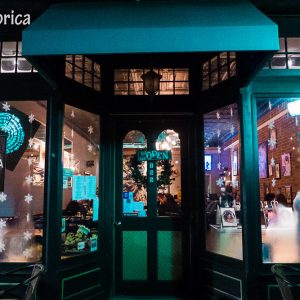 The main attraction here is Dia:Beacon, an art museum which features large-scale sculptures by the the likes of artists such as Richard Serra. The 300,000-square-foot museum was once a Nabisco box printing factory—wandering around you’ll notice the industrial vibe that the wide open space creates. Dia:Beacon sits on the banks of the Hudson River so there’s beauty inside and out.

A short walk away, the town of Beacon has cafés, pubs, art galleries, and antique shops to keep you busy all day. A local favorite is The Pandorica, a Dr. Who-themed café that welcomes “Whovians and non-Whovians alike.”

Getting there: take the Metro-North from Grand Central to Beacon. Travel time is approx. 88 min. Dia:Beacon is a 10-minute walk from the station.

Cold Spring is another lovely little river town to poke around in. The main reason to head up this way, though, is for some peaceful and scenic hiking. Trekking up Breakneck Ridge will give you the best views of the Hudson Valley. The hike is rated as difficult. It’s pretty steep in some spots and rock scrambling may be involved. If that’s something you’re excited about, then the rugged views overlooking the Hudson River are totally worth the effort.

Getting there: take the Metro-North from Grand Central to Cold Spring. Travel time is approx. 80 min. On Saturdays and Sundays, the Metro-North stops directly at the trailhead—get off at Breakneck Ridge station.

Brooklyn’s Coney Island and Brighton Beach serve a purpose on sweltering days but they’re city beaches, so they’re crowded beaches. Long Beach, on the south shore of Long Island, is a gift. It’s 3.5 miles of powder sand stretching along the Atlantic Ocean, and completely accessible by public transit.

In 2012, Hurricane Sandy hit Long Beach pretty hard; as a result there’s a brand new boardwalk. There’s also a wide beach, surf schools, and places to grab lunch, drinks, and ice cream. No need to lug your beach chair or umbrella; those can be rented once you arrive. It’s an easy summer-day escape.

Getting there: take the LIRR from Penn Station to Long Beach. Travel time is approx. 53 min.

In the center of this 400-acre opulent estate sits a Gilded Age-era mansion known as Coe Hall. William Coe earned his wealth in the insurance business and built Coe Hall as his country
home. Inside are hallways lined with decadently furnished rooms, including one that acted as a speakeasy since the home was finished during the early years of Prohibition.

Coe Hall is surrounded outside by intricately manicured gardens with pleasant pathways and beautiful foliage. The grounds serve as a public garden and educational arboretum. Orchids,
palms, and ferns grow inside a greenhouse, plus spectacular seasonal poinsettias and Easter lilies.

Don’t miss the sensory garden, where visitors can indulge in such pleasures as the taste of fresh blackberries and the smell of lavender.

Getting there: take the LIRR from Penn Station to Oyster Bay. Travel time is approx. 1 hr. 20 min. Take a taxi 1.5 miles to Planting Fields.

One of the prettiest sites in the Garden State is Princeton University. The fourth oldest college in the United States is a perfect specimen of Ivy League prestige. The overall design of the
campus is an architectural style known as Collegiate Gothic, which somehow makes it appear subdued and majestic at the same time. The college’s art museum is worth a look—they’ve
been collecting art since the college’s founding in 1746, so some pieces pre-date the American Revolution.

The campus sits on the edge of downtown Princeton, a charming and walkable city. There are plenty of places to grab a meal or sit in a café and rub elbows with Ivy Leaguers. Yankee
Doodle Tap Room is a casual place to grab a bite and check out the huge, original Normal Rockwell painting.

Spend the day exploring 42 acres of large-scale art installations set on the former site of the New Jersey Fairgrounds. There is a selection of rotating and permanent exhibits. Besides being an open-air sculpture museum, the grounds serve as an arboretum; you can stroll on tree-lined paths or around a lake ringed with weeping willows, mixed in with spectacular artwork dotting
the landscape.

Over 2 million visitors come each year for the art, as well as the many workshops, tours, and lectures. Grounds for Sculpture is open year-round. It’s worth it to have a look at different times of year to see how the art interacts with nature—as the light and colors of the seasons change, so do the lights and colors of the sculptures.

Getting there: take NJ Transit from Penn Station to Hamilton Station. Travel time is approx. 1 hour 30 min. Take a taxi 2 miles to Grounds for Sculpture.