A favorite location for skyscraper designers, the Financial District (now sometimes known as FiDi) attracts as many tourists and trendy locals s it does bankers and businessmen. All this new development cannot change the fact that Downtown is the oldest neighborhood in the city. It is even older than America, having been settled by Native Americans for many generations before the Dutch established a shipping port and fort in 1625 known as New Amsterdam. Wall Street was originally as far North as the settlement extended! New York City also played a major role in the American Revolutionary War and some of these sites can still be visited today. Check out some of them the next time you find yourself Downtown.

What better place to start a historical walking tour than at a bar! It’s what the founding fathers would have wanted; during colonial times it is estimated there was one bar for every TWENTY people in the British colony known as New York. This land was originally owned by the first NYC mayor to be born in the colony, Stephanus van Cortlandt who gave it to his son-in-law Stephen DeLancey. DeLancey then sold the building to a man named Samuel Fraunces who turned it into a bar, originally called the Queen’s Head. By the 1770s, this bar was the secret headquarters for the Sons of Liberty. This bar was involved in the city’s very own “tea party” in 1773 when patriots forced a British ship captain to apologize for attempting to bring tea to New York during the tea crisis. They then disguised themselves as Native Americans and dumped his tea in the harbor, just like in the more famous Boston Tea Party. The tavern was also involved in negotiations with the British and the “Long Room” was the site of a fancy turtle feast George Washington held for his troops post-Revolution. He allegedly took each officer aside for a private word after delivering a speech of gratitude. After the war the bar served as the offices of Foreign Affairs, Finance, and War. Today it is partly a museum dedicated to the American Revolution, George Washington, and the Sons of Liberty and also has a restaurant and a whisky bar. 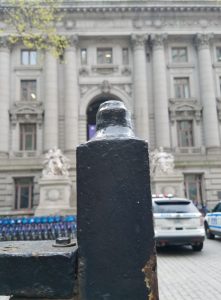 Not far from Fraunces Tavern is a small park and public square aptly known as Bowling Green where people would play lawn bowling during colonial times. It was also a meeting place, and is still used for gatherings of all sorts today. A lot has changed around the area, but the park is still known by the same name and looks similar to how it does today. One big difference would have been a giant gilded statue of King James III on horseback that was in the middle of the park from 1765-1776. On July 9th 1776 after a reading of the Declaration of Independence in City Hall Park just a bit further uptown, some of the Sons of Liberty came down to Bowling Green to tear down the statue and get rid of all signs of British rule. They tore down the statue, cut it into pieces, and sent a bunch of the statue down to Connecticut to be melted down into musket balls to shoot at the British! That is some pretty good revenge! Historians also believe crowns were once adorning the top of the fence posts surrounding the park and the rioters sawed them all off, and if you run your hand over the tops of one these posts, you will find it to be rough. That fence has stood the test of time! Today there is a fountain and seasonal flowers to enjoy. 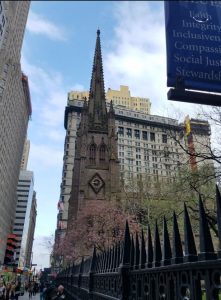 Built in 1698, if this building had not been burned down once (in 1776 during the Revolution) and was damaged by snowstorm in the 1800s, it would be the longest continuously used building in New York City history. Now it is under a major renovation once again, but it still is very impressive. The large spire made it larger than any other structure for many years, people even informed travelers if they were sailing into New York Harbor to look for Trinity to know they had arrived. Although the clergy was required to be Loyalist during the war, after the Revolution, George Washington and Alexander Hamilton as well as many other prominent New Yorkers worshipped at Trinity. Hamilton even advised the church on financial and legal matters, had five children baptized there, and of course is buried on the grounds. Hamilton and his wife Eliza are the most popular graves in the site and the biggest draw for Trinity today, although they are still an active church with services that can be attended by all. 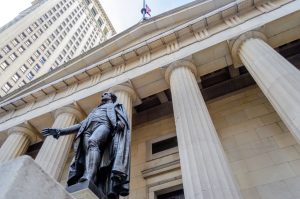 The original Federal Hall was built in 1703 and saw a ton of incredible events within its walls including the drafting of a message of protest sent to King George III in response to the levying of the Stamp Act and the libel trial of John Zenger which led to the establishment of freedom of the press, later part of the Bill of Rights.After the war, this would be the first Capitol Building for the country before the capital moved from Philadelphia and then down to Washington DC.This was where George Washington’s inauguration as the first President was held. Although this was an incredibly historic building, when the capital moved out of New York, it was determined unnecessary and the original was torn down in the 1790s. About thirty years later, it was rebuilt and served as a Customs House and Sub Treasury with millions of dollars worth of gold and silver until the Federal Reserve Bank was established in 1920. Today it is a national monument and offers rotating exhibits as well as a permanent collection dedicated to George Washington including a replica of his desk, the Inaugural Bible, and a recovered piece of the balcony he was sworn in on, the only thing remaining from the original structure. 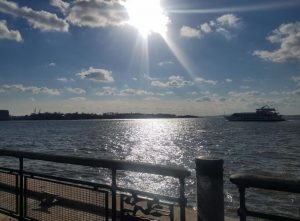 Walking back downtown, towards Fraunces Tavern but continuing as far south as you can go, Battery Park and New York Harbor sit at the tip of the island. Today known for its views of the Statue of Liberty and for leisure, battery park was originally meant for defense. The “battery” in the name refers to a battery of cannons that defended the colony since the days of the Dutch settlers. The Battery continued to be used throughout the American Revolution and was the center of Evacuation Day celebrations at the end of the war. Later on Castle Clinton was formed on an artificial spit of land in the harbor in 1811, meant to defend the city during the War of 1812, later a landfill encircled the fort, connecting it to the rest of Manhattan. It later became one of the cities most popular parks and still enjoyed by many to this day. During recent excavation in the park, a part of the original Battery Wall was uncovered and can be viewed inside Castle Clinton today. New York Harbor is just as breathtaking now as it was during colonial times. Although less shipping occurs in this harbor than in the past and the vessels sure are different than you would have seen in the 1700s it is not hard to understand the value of these waters. New York would not be nearly as important to the country without its advantageous harbor. Once teeming with sea life and beavers, later becoming the most important shipping port in the country, it makes sense the British did not want to give it up without a fight! Without the Sons of Liberty and the founding fathers, we might still have been British subjects to this day. Although New Englanders (especially Bostonians) might think they have the monopoly on Revolutionary War sites, New York offers as much history in a smaller area. Take a walk and see it for yourself!