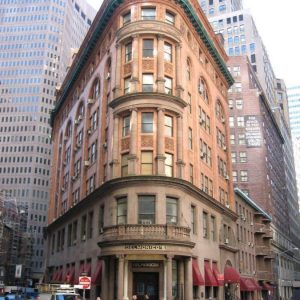 Celebrity chefs go into (and out of) business here and there’s no lack of the coveted Michelin-Starred restaurants scattered around the city. But what marks a restaurant as an unmistakable, quintessential New York City restaurant? Often it’s something unnamable. It’s written on the faces of the regulars who have been coming to the same place for lunch for as long as anyone can remember. Or maybe the restaurant has developed a particular internal culture because it’s had decades, or more to develop it. This internal culture can come off as a complicated but precise process of ordering food, whether substitutions are allowed, how to pay for your meal, etc., but if it’s a true New York eatery, some friendly customer or server, or even the owner herself will clue you in.

Some of these classic restaurants share common traits. They can be expensive, like Delmonico’s Restaurant, which offers a New York Strip for just under $50. Or it can be challenging to get a reservation, like at P.J. Clarke’s, who opened their doors in 1884. The restaurants mentioned below all have a definite “New York” air about them, and prices that won’t break your budget.

The word “unfussy” is what first pops up in an internet search, and that’s exactly what you’ll find here. A server will seat your party at a communal dinner table. No menus are passed out, but he or she will open a dialogue with you, ask you what you’re in the mood for or what you like to order in the way of Italian food. You’ll find they have hearty fare like steak Pizzaiola and baked clams. It’s a busy restaurant in the heart of the Bronx’s Little Italy. There’s quick customer turnover but at the same time, the servers don’t make you feel rushed. When you ask for the bill, your server will look at his notes and give you a number; just trust him; it’s usually an incredibly reasonable amount. So just remember a few tips at Dominick’s and relax into the experience: No reservations, no menus, and no checks. Oh, and it’s cash only, of course.

Lunch counters went out of fashion back in the 1960s but at Eisenberg’s, customers can still grab a padded stool and watch cooks clad in white paper hats frying an order of eggs or
assembling a BLT. Eisenberg’s captures the nostalgia of a bygone era—when people socialized a little more freely and thought nothing of popping into a luncheonette alone for a coffee and
a slice of pie. Eisenberg’s menu items have an air of nostalgia, too, like the meatloaf with mashed potatoes or the liverwurst sandwich. The tuna melt is popular and customers, some of
whom have been eating here for 40 years, swear by the egg salad sandwich. It’s a friendly place with photographs that line the walls and an owner who knows many customers by name.
Credit cards are accepted.

For anyone on a quest for the most iconic restaurants that symbolize old New York, Katz’s Deli is a must. Long on the tourist hit-list, they differ from many other tourist-heavy places in that their food remains unbeatable. The secret is in their meat-curing process, which happens inhouse and takes up to a month to complete. Customers can choose corned beef or pastrami
on rye, with a side of the best deli pickle you can imagine, all washed down with a chocolate egg cream, which, ironically, contains no egg. Katz’s Deli is a true New York experience. You’ll
probably have to wait in a pretty long line to get in, but it moves quickly. Once inside, there is another set of lines to wait in, depending on what you’re ordering, so pay attention to the
signs. And at all costs, don’t lose the ticket you’re handed on your way in. It’s literally your ticket back to the outside world. Payment is cash only.

Zabar’s is kind of a hybrid between take-out and eat-in. Technically, there is seating available at the bar that lines the back window, and also around the middle island encircled with stools, which really takes up much more room than it should for a café this size. If you dine in, it’s meant to be a quick eat-and-go kind of place. You’ll find if you linger too long, people will begin to hover over you in a quest for your coveted seat. It’s a great place for lunch: items include bagels, Panini’s, knishes, a variety of soups, and more. If you’re looking for a more leisurely meal, it’s best to take your Zabar’s goodies to nearby Central Park, or even find a city bench. Sometimes in New York, you have to improvise! Zabar’s accepts credit
cards.

Any good list of New York eateries must end with a discussion of desserts, and Café Lalo has some of the best in the city. With its exposed brick walls and old-fashioned French posters, the décor creates a European air. The floor-to-ceiling windows encourage customers to people-watch out on the brownstone-clad streets of the Upper West Side. And the dessert . They also serve a selection of Mediterranean-style dishes for those who need sustenance before sugar. A full bar is available, including alcohol-infused shakes if you want to combine dessert with drink. The whole affair is richly romantic, and if you’re wondering where you’ve seen the place before, a sign leading into the restaurant plainly reminds you that it’s the café from another Meg Ryan movie, You’ve Got Mail. (For the other Meg Ryan site, look for the sign hanging from the ceiling in Katz’s that indicates where Harry Met Sally). Café Lalo accepts credit cards.