Should I Get One Slice or Two?

Few topics will cause more debate among New Yorkers than where to find the best pizza. Opinions are plentiful and to make matters even more complicated, new pizzerias open and close all the time. Here’s a list of the absolute best, and in many cases, longest standing pizzerias in New York.

These are the new kids on the block compared to the others on this list, which range from 40 years to more than a century old. But that doesn’t mean they haven’t earned their stripes. Francis Garcia and Sal Basille grew up working at their family’s Staten Island restaurant and in 2008, the cousins struck out on their own, and quickly became favored by locals and celebrities. They’re praised for their dough and fresh ingredients, and have been featured on such powerhouse programs as Jay Leno and Rachel Ray. In 2010, the cousins opened their second location and now have restaurants in Manhattan, Queens, Brooklyn, and even one in Miami. Traditional pies are served, as well as variations like Crab Pizza and Meatball Parm Pizza. Various locations

Like so many pizzaiolo before him, Domenico De Marco came from Italy and settled in Brooklyn, opening this neighborhood favorite in 1965. Legend has it that to this day, Dom, as people call him, handcrafts each pizza himself. He won’t divulge his secret ingredients, but it’s well-known that many of them are imported from Italy. He’s gained his legions of fans by using consistently fresh ingredients for over 50 years, for the occasional old Italian music that plays in the background, and for making each of his pies with lots of TLC.
1424 Avenue J, Brooklyn 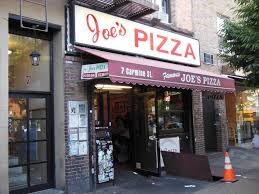 Joe Pozzuoli hails from Naples—the city synonymous with mouth-watering pizza—and now well into in his seventies, he can still be found at his restaurant, making sure his namesake pizzeria stays true to its values: using simple but authentic ingredients, and only the best. Pozzuoli has a great love for the diversity of Greenwich Village, where he opened in 1975, and believes that he has a true understanding of what people want in a pizza. The people who work at Joe’s apparently appreciate Joe’s philosophy, too. His employees stay with him for decades, meaning there isn’t a constant staff turnover, which results in a consistently high-quality food.
7 Carmine St., Manhattan 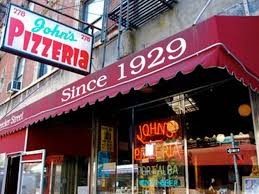 Original owner John Sasso had to move locations once, and when he did, he dismantled his sacred coal- fired brick oven and moved it to his new restaurant on Bleecker Street. The pizzeria was bought by the Vesce brothers in the 1950s and remains in that family today, still using Sasso’s brick oven. The tin ceilings and original wooden booths lend it an old-world feeling. John’s is frequently included on “best of” pizza lists, and featured on travel and food programs.
278 Bleecker St., Manhattan

In the late 19th century, Gennaro Lombardi opened a grocery store on Spring Street, north of Little Italy. In 1905, he was granted an official license to run a pizzeria, which earned him the Pizza Hall of Fame honor of being the first pizzeria in the United States. Lombardi’s closed for a time in the 1980’s, but Gennaro’s grandson reopened it down the block in 1994 and still runs it today. Many customers come for the history, which is now over a century old and counting. Pies are still cooked in Gennaro’s original coal oven.
32 Spring St., Manhattan

News clippings line the walls here, telling the story of Mario’s, which began in 1919, or rather, the restaurant’s story begins then. Mario Migliucci’s family actually left Italy in the early 1900’s and came to New York via Egypt, where they opened the very first Italian restaurant. Fast forward years later, and Mario was running his namesake restaurant in a neighborhood synonymous with Italian immigrants—Arthur Avenue in the Bronx. Mario once famously turned down Francis Ford Coppola’s request to film a scene from The Godfather in the restaurant, a decision that he never wavered on and never regretted. Mario’s son Joe took over in 1998 after Mario died.
2342 Arthur Ave., Bronx

Mostly European immigrants and born and bred New Yorkers lived in Astoria in the 1950’s when the Rizzo brothers, along with their brother-in-law, opened their pizzeria here. At the time, customers had one choice: a thin, crispy pie which eventually earned Rizzo’s a faithful following. The owners have changed with the times. People from every corner of the earth now live in Queens, and the pizzeria has expanded their offerings; however, they pride themselves on being pizza purists. In other words, you’ll never find a pineapple pizza on their menu. They also now have a location on the Lower East Side.
3013 Steinway St., Astoria, Queens
17 Clinton St., Manhattan

The crispy crust and exactly right amount of cheese are what many customers cite as the reason for their loyalty to Rosario’s. People also love the owner, Sal Bartolomeo, who didn’t speak a word of English when he first arrived in America, but now regales his customers with stories of New York’s old days. The Lower East Side is a neighborhood in the midst of great change, but Sal is one of the constants. He loves his city and his neighborhood, and this is evident in his personality, and in his pizza.
173 Orchard St., Manhattan