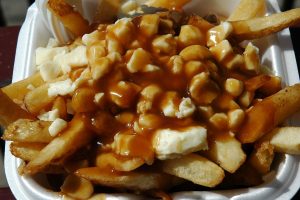 Indulge in the ultimate Canadian comfort food: poutine. What’s not to love?  Double fried french fries layered with hot melted cheese curds and a meaty brown gravy. This is a decidedly decadent treat and Canada for sure loves its poutine. You’ll find poutine on menus all over Toronto and Canada, usually with these three staple ingredients; Fries, Cheese curds, and Gravy, but some places will jazz up this comfort food with different spins on the classic recipe.

Where does poutine, this national treasure, even come from? Well, It wasn’t even originally called poutine, it was first called 50/50. That’s where you get that first mixture of cheese curds and french fries. The next step in its evolution was when the brown gravy was added and it was then referred to as “mixte.” The name “poutine” as we know it today, appeared out of the Quebec in the 1950’s and only gained that name when large restaurant chains started selling the product. This names origin is probably due to the fact that other dishes made of potatoes are also called “poutiness”, but it could also be derived from the English word “pudding.”

The massive controversial origin to the creation of poutine will be argued by scholars for countless generations, but it is believed that poutine originated in the French speaking province of Quebec. Various places in the region claim the credit for this invention but one thing is for sure: poutine was definitely born in rural Quebec in the 1950’s… but to whom exactly should the origin of poutine be linked?

The most widespread story is that poutine originates from a restaurant formerly called Le Lutin qui rit in Warwick, in the Arthabaska region. In 1957, a client named Eddy Lainesse asked the owner Fernand Lachance to mix cheese curds with the fries. Conversely, a Drummondville restaurant called Le Roy Jucep registered a trademark stating that it is the inventor of poutine. Jean-Paul Roy, owner of this restaurant in 1964, is the first one to have served poutine as we know it today, i.e. “French fries, cheese and gravy.” Regardless of who created it, it is delicious and genius! 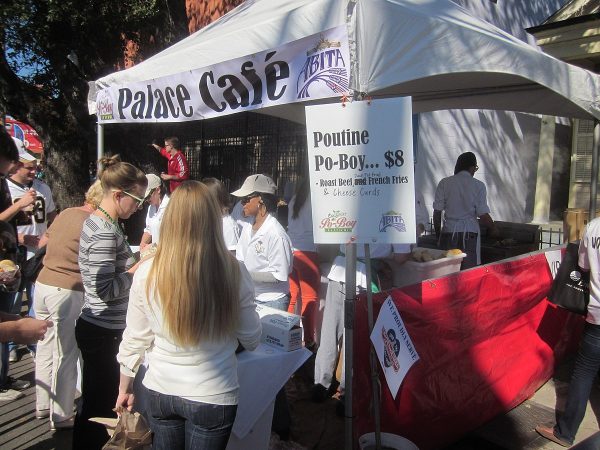 You would think since Poutine has been around at least since the late 1950’s that Toronto would have been serving and celebrating it. But that’s not so! Long being associated with Quebec cuisine, it was perceived negatively and mocked, and even used by some to stigmatize Quebec society. Poutine later became celebrated as a symbol of Québécois cultural pride and it hasn’t been until recently that this culture has been celebrated, in a small way, across the boarder here in Ontario. This May 2020, the 3rd annual Toronto Poutine Fest will take place on May 22nd – 24th. The festival celebrates both Ontario & Quebec’s best food trucks. Yearly they return to the annual Toronto Poutine Fest to battle for the grand title of #1 Poutine in Toronto. The Poutine Fest is held in Yonge-Dundas Square over these fun filled 3 days! Featuring live music, a fun atmosphere and over 50 varieties of poutine! Get ready to stuff your face and have a good time!

Your traditional poutine is scrumptious…but this competition is not your Grandma’s Poutine! Everything from Vegan poutine to lobster and bacon, duck, taco poutine, buffalo chicken, land and sea, and even Italian style poutine…there is a poutine for everyone! So as we all gear up to celebrate Canada’s national gift of street food! Come with an empty stomach and open mind. For as I have discovered Canada’s favorite national dish has something for everyone.  Be sure to get your fill, as the dish is rarely found outside of Canada and the northern border cities in the United States. Check out TopDogTours: Toronto for tours that feature some of the best eateries and poutine stops the city has to offer! Bon Appetit!