During what is now known as the Gilded Age, the wealthy top tier of NYC society lived in lavish mansions and brownstones while a large percentage of the population lived in abject poverty. Constantly trying to carve a piece of the city for themselves out of sight from the poor, the neighborhood of Gramercy came to be a permanent home for wealthy and powerful individuals. Today the area is still full of well-to-do residents but now is also known for its cultural centers and clubs. One of the first and most important contributions still remains: The Players Club.

Inside the Players Club 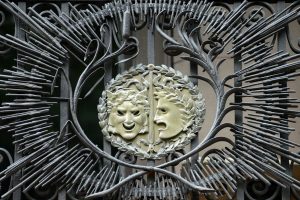 Located at No. 16 Gramercy Park South sits a lovely Gothic Revival mansion with two large gas lights flanking the entrance. A large metal plaque of comedy and tragedy masks surrounded by bronze rays gives a clue to the people who call this club a home away from home. Built for actors, the Players Club gets its name from the once-common name for performers. Established New Years Eve 1888 by Edwin Booth, the most famous actor of his day. Booth elevated the status of the American actor.

At a time when actors were considered ruffians and second-class citizens, the fame and career of Edwin Booth changed everything for the art form. The club was very exclusive and still is to this day. Booth wanted to make the club not solely for performers but wanted to use his connections to esteemed men of other professions to mix and mingle amongst the actors, a genius move to ensure the reputation of actors as dedicated and worldly people deserving to enter the upper crust of polite society. Even the stuffy residents of Gramercy could not complain about all these actors hanging around if Edwin Booth was their friend. The other members were quick to donate art, books, and other curious artifacts to make the club into a form of museum. Each space in the clubhouse is unique, offering a look into the profession of theatre and into the lives of its many members over 130 years. 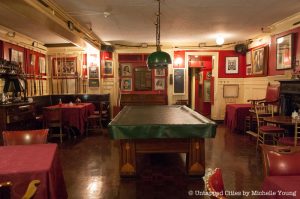 An active restaurant for members to grab a bite and a chat with their fellow player, the grill also features a large pool table and cues on the wall. Up above the fireplace you can see original member Mark Twain’s personal pool cue. For artwork, typically you will find caricatures, many done by legendary Al Hirshfeld. There is even a Hirshfeld caricature of Booth, the only one he made for a person who was no longer alive. Also you can find the Players Bar and in the back, the ladies room is known as Lucile’s Loo for Lucille Lortel; known as the Queen of Off-Broadway! Head up the stairs to the impressive main hall for more artwork.

This grand hall features a gorgeous 20-ton white marble fireplace designed by famed architect and member Stanford White, who converted the original 1844 building into the club. He was hand-selected by Booth for his remarkable achievements in the field of architecture. White worked the Players’ seal of the comedy and tragedy masks into the fireplace.

Above is a large portrait of not Edwin Booth but his father Junius Brutus Booth. The elder Booth was an esteemed actor in England but had a troubled life once he left for America with his 19-year-old mistress (Edwin’s mother). While he performed all over the country, his son Edwin was selected to follow him along since his drinking had become so bad he needed to be chaperoned. Sometimes he had to perform in his wake if he was incapacitated. Although Edwin had a complicated relationship with his father, the prominent placement of this portrait suggests the respect and love he had for the man. The room also features several other portraits, including a large portrait of Edwin Booth as Hamlet, the role he was most known for. Today the Main Hall is used for receptions and gatherings. Traditional black-tie events like the annual Players Founders’ Night and for Edwin Booth’s birthday usually begin here.

The most represented artist at the Players is Everett Raymond Kinstler. Known as Ray to many of the members, he painted dozens of the portraits that adorn the walls of the club today. In this room you will find the likeness of Katherine Hepburn, James Cagney, and strikingly realistic portrait of Christopher Plummer. The only painting that is not a Kintsler in this room is the large copy of a portrait of Edwin Booth done by original member John Singer Sargent. Also see a selection of Booth’s own props and you can step out on the balcony and get an amazing view of Gramercy Park.

Head to the third floor to see the most incredible part of the Players Club. Aside from all the amazing art and performance spaces in the club, the Booth room shows the private side of one of the most famous men who ever lived. This small bedroom was filled with the few things Booth collected after a life on the road. It is surprisingly humble. His bed, the very one he died in on April 7th 1893, is small. There is a small cot where his daughter Edwina stayed beside him until he passed. You can see her portrait right across the room from the bed, where Edwin could always see her. A touching bronze cast of their hands sits on the table. You can also see his vast pipe collection and believe it or not, you can still smell how much he loved smoking tobacco- the odor lingers. There are other portraits of photos of his family members, including the only picture of his infamous brother John Wilkes Booth you can find here. By Edwin Booth’s wishes, his name was never to be spoken in the club’s walls.

Besides these rooms there are many others to visit including one of the best performing arts libraries in the country, a small cabaret stage, and you can even find Mark Twain’s favorite poker table! The club is private and members only, so to get access you need to know a member or you can take a tour with Top Dog Tours, one of the only companies allowed to operate inside the club.

Book a tour of the Players Club today! 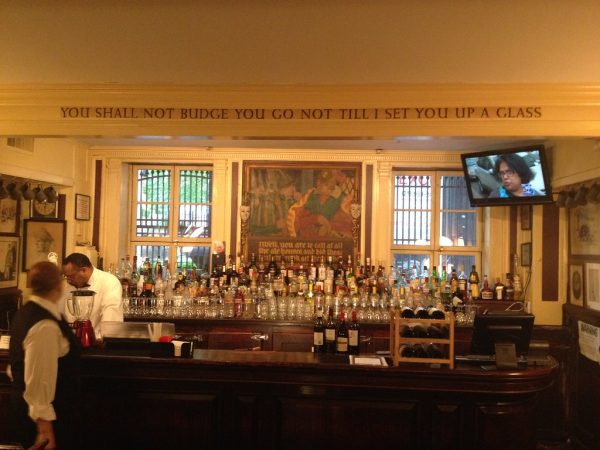