A Walk in Central Park

The weather is finally starting to turn around here in NYC and spring is officially here!

On a nice weekday afternoon I decided to join many other tourists and New Yorkers for a stroll through Central Park. I spend a fair amount of time in the park as a local, but it is never enough! The park is amazing in every season, I even got lost in it during a snowstorm a few weeks ago! That being said, spring is one of the best times of year to visit since the temperature is more moderate than the summer or winter. This time there was a nice breeze and the plants were just starting to bloom in some areas. The next few weeks seem like they will be perfect for visiting of the city’s greatest treasures! Here is some of what I saw this time on my walk in Central Park.

Horse Carriages and The Pond 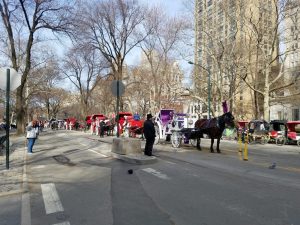 I began my walk at Grand Army Plaza which was buzzing with activity from people meeting up to others trying to catch cabs. The biggest change I noticed was the horse and carriage stand being moved from off of 59th st to just inside the park. People seemed to have no trouble finding them and cars were not as close as they were before, they seemed to have a bit more space in general. I saw a few families hopping up into the carriages and trotting off into the park which is a classic Central Park activity. I continued on into the park past the beautiful pond. People were taking photos of some birds enjoying the water. From the pond, I encountered what was once known as the children’s area of the park. I walked through the former Dairy, past the chess and checkers house down the 65th street traverse to the grand Carousel.

Although I really wanted to, I decided not to ride the Carousel and left it for the families and kids, although there were a few adults riding solo. This carousel is fourth in park history. The original is said to have been powered by a live donkey and horse, trained to start and stop on command. The next two were destroyed in fires. The current one was found in an abandoned Coney Island trolley terminal and dates back to 1908 and was restored in the ‘90s. The Carousel is especially popular with children and couples of all ages on dates. Check it out when you come visit! I decided to walk uphill to an area known as the Mall next. 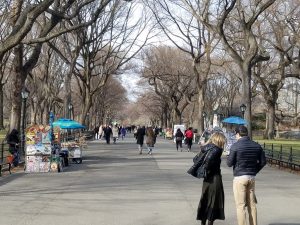 Not for shopping, but originally for showing off, the term mall refers to a formal feature of a proper (European) park; a long promenade where people would gather to stroll. This was an important part of being considered a member of the American upper class; you would leave your carriage and walk amongst the common folk, which set this mall apart from the ones found across the pond. Today it is a still a place where people from all walks of life gather. The other day was no exception, I saw people from all over the world posing for pictures, looking at the amazing bronze statues scattered down the promenade, and browsing the photos and posters for sale on carts and tables set up throughout. The shade from the American Elms made it a little cooler than the rest of the park but it was still plenty warm from the sun peaking through the branches. Walking through the mall you cannot help but feel like you are in a movie, since so many have been shot here including Home Alone 2, Enchanted, and Spiderman 3. At the end of the mall, I stopped to admire Bethesda Fountain and the Lake.

A trip to Central Park is not complete without a visit to its centerpiece: Bethesda Fountain. In the center of an impressive pool is a sculpture of an angel touching down on top of fountain. When I went the water was not yet flowing, it was also a bit windy so that may have been for the best. People were sitting down inside the dry pool which was an interesting site considering normally it is full of water and coins! I walked to the other side of the fountain and took a look at the Lake, which comes up right to the edge of the brick paved path.. Lots of people were boating and enjoying their time on the water, the Loeb Boathouse also seemed very inviting across the way. I decided to keep walking to one of my favorite parts of the park, The Ramble. 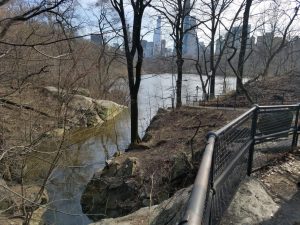 I have been to most areas in the park at least once, but one area that I have not explored fully, and don’t know if I ever will is the wooded area known as The Ramble. This part of the park was designed to look as natural and rugged as possible, while still providing properly marked paths and trails. I decided to wander up a way I never had before and found myself seemingly in the middle of a forest. There were few people and the trail was a bit steep, but I got some incredible views of the Lake from above. There was also a small creek formed from the lake and some rocks. After about fifteen minutes I found myself back in the busy part of Central Park that is near the Museum of Natural History. The sounds of the city, traffic, and bikes came back all at once, and I noticed how nice it was to be tucked away in the middle of the quiet Ramble. After all that walking, especially in the hilly areas, I decided it was time to go.

There is so much more to see in Central Park, I actually meant to visit two of my other favorite places in the park: the Jacqueline Kennedy Onassis Reservoir and Delacourte Castle but I guess I will just have to visit them next time. If you are planning a trip there are so many other places to consider like the Central Park Zoo and The Wollman Rink! Also consider taking a tour with Top Dog Tours, we provide a lot of interesting information and will take you to some of the highlights of the park, including some of the ones I got to see this time. No matter what, as long as you get to visit Central Park you are sure to be impressed by the most popular urban park in the world!