The Other Side or Ellis Island’s Hospital 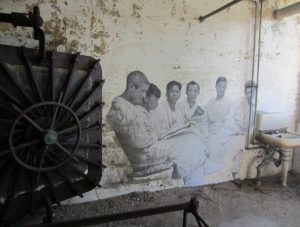 If you join us on our Statue of Liberty and Ellis Island tour, you’ll notice a cluster of buildings on the south side of Ellis Island, set apart from the main museum. These buildings make up the island’s hospital complex which until fairly recently, had been abandoned and left to decay.

When immigrants arrived on Ellis Island, doctors were on hand to monitor them. The new arrivals had to walk up a long stairway, carrying their luggage, and if anyone walked unsteadily, had a cough, or showed any other visible signs of illness or disability, they were pulled out of line for a full examination. If the exam revealed a medical problem, they were confined to Ellis Island Hospital until they were well enough to be sent on their way.

Now, guided tours are available to select areas of this former hospital, which once operated as the largest Public Health Service facility in the United States.

History in a Time Capsule

Visitors will find the hospital buildings in extreme states of disrepair. Windows are broken, the shattered glass is lying on the floor where it fell, and their iron window panes are rusted and disfigured. But there’s also the strong sense that you’re standing in a time capsule, and certainly these buildings have witnessed a lot.

More than twelve million immigrants passed through Ellis Island between 1892 and 1954 but eventually, two World Wars stemmed the flow of immigration and led to tougher entry restrictions. By 1954, immigration to the U.S. had plummeted and Ellis Island closed. Even when the main immigration museum opened in 1990, the hospital complex remained shuttered. It was only in 2014 that the buildings were stabilized and small tours began. 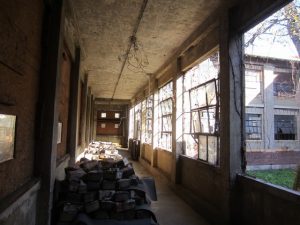 One of the main stops on the “Hard Hat Tour” (tour guides pass out hard hats when the tour begins) is the cavernous laundry room, occupied by huge, industrial machines where sheets were washed and mattresses were sent for sterilization. The machinery is rusted out, and pieces of the laundry room’s walls and ceilings have fallen off in large chunks, creating piles of debris scattered on the floor.

As if the scene wasn’t stark enough, these neglected interior spaces serve as a dramatic backdrop for the art installation titled “Unframed—Ellis Island” by the French artist JR.
JR is known worldwide for his thought-provoking art; he was invited to create this exhibition in conjunction with the hospital tours. He selected photos from the Ellis Island archives, blew them up to life size, and placed them randomly enough throughout the wards that visitors aren’t totally sure when one will appear. When they do, they make an impression.

Some of the photos feature people stepping onto Ellis Island for the first time; the women have scarves modestly wrapped around their heads, the men wear long black overcoats and carry meager possessions or nothing at all. Other photos show children staring at the camera or just beyond it, at some unknown focal point.

All of the art functions to remind visitors that they are passing through a place where profound transformations took place, whether the results were good or bad for those involved.

An Education in Public Health 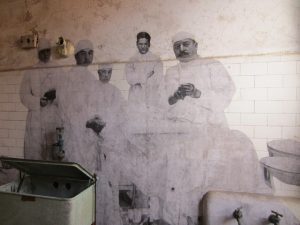 An Ellis Island Hospital tour is not only a journey through the history of U.S. immigration, but of the history of public health, too. Because so many people from around the world passed through this one place, doctors flocked to the hospital to study diseases that the U.S. had previously not seen before.

Common afflictions that confined new arrivals to the hospital included trachoma, favus, measles, tuberculosis, and many more. Because the hospital was a major teaching facility, there was also a complete morgue and autopsy theater, where doctors and medical students learned by watching autopsies. Visitors on the tour will see the contagious and infectious disease ward, the morgue and autopsy theater, the hospital kitchen, staff housing quarters, and much more.

The primary motivation for the restoration of the hospital complex comes from Save Ellis Island, a nonprofit foundation whose primary goal is to restore the 29 hospital buildings, and preserve the history of the men, women, and children who passed through its doors.

Tours of the hospital complex are only available with Save Ellis Island guides. The guides are knowledgeable about the hospital’s history and passionate about its stories. Throughout the 90-minute tour, they offer fascinating tidbits of historical trivia; for example, the infectious and contagious disease ward was built on Florence Nightingale’s principles that fresh air and direct sunlight contribute to making patients well. Other information, such as how child-arrivals over the age of 13 were considered adults, and the fact that there were no female doctors on staff until 1914, gives a chilling glimpse into the vulnerable states that many immigrants faced.

Through the tour guides, the buildings themselves, and JR’s striking photos, you’ll gain a sense of the stories that unfolded in these buildings. Ellis Island has always been a symbol of hope and new beginnings, but those new beginnings most likely came with extreme hardships. Immigrants arrived full of hope, yes, but also sometimes sick and weakened from the journey.

The luckiest ones passed easily through the Ellis Island inspection process. Approximately 10% were hospitalized; the average hospital stay was two weeks and only if the disease was treatable. If a patient was incurable, they were tragically deported back to the country they had recently worked so hard to leave. Since an estimated 40 percent of Americans have relatives that immigrated through Ellis Island, this is a place that truly tells some of the many stories of where we came from.